From Fortress Blast
Jump to navigationJump to search 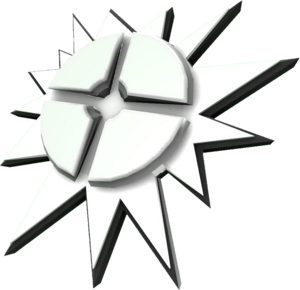 The powerup model made by ChargingTurnip. All powerups use this model but differ in colour.

Powerups are spawned in set locations around a map at the start of a round (depending on the current map's associated .json file), and/or are dropped when players die (depending on the settings of the ConVar sm_fortressblast_drop and its sub-ConVars). Collecting a powerup will replace any already collected powerup on the player's screen.

Powerups that are spawned at the start of a round are permanent and respawn 10 seconds after being collected, however, powerups dropped on death only exist for 15 seconds upon spawn and do not respawn when collected. Particular powerups can be disabled by setting the value of the bitfield sm_fortressblast_powerups.

Powerups are tf_halloween_pickup entities that the plugin stores IDs for. All of these entities, including ones not spawned by Fortress Blast, are deleted at the start of a round to prevent duplicate powerups existing. This does not conflict with stock maps that use these entities such as

The command sm_setpowerup can be used to set the equipped powerup of any player or group of players based on the ID of the desired powerup.

Retrieved from "https://fortressblast.miraheze.org/w/index.php?title=Powerups&oldid=737"
Category:
Cookies help us deliver our services. By using our services, you agree to our use of cookies.